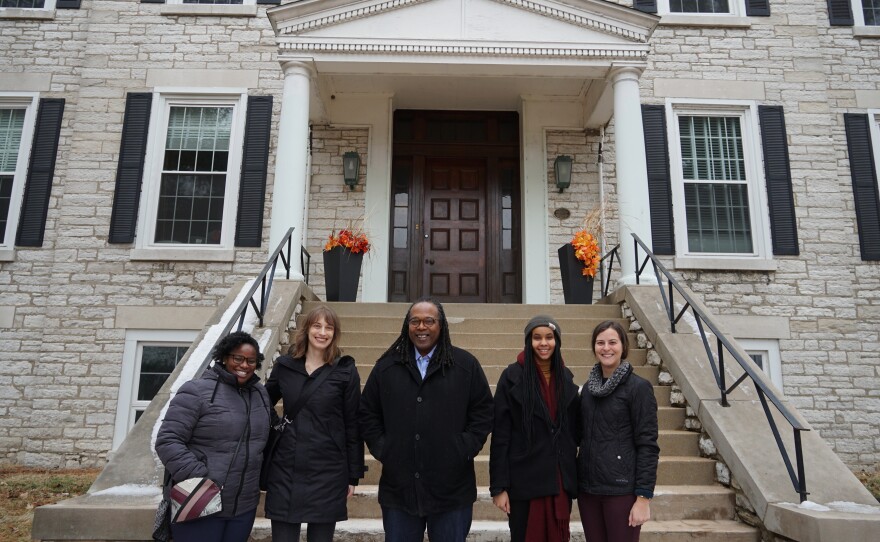 This episode is the first of a two-part tribute to a man whose passion for social justice and cultural memory impacted hundreds of people in the St. Louis region: Dr. Jonathan Cedric Smith, who died this year on Juneteenth. Among many community roles, he served on the board of St. Louis Public Radio. Last year, Lauren and Jia Lian had the opportunity to interview Dr. Smith about his perspective as Co-Chair of the Slavery, History, Memory, and Reconciliation Project. To introduce you to this project and Dr. Smith’s role in it, we speak with Marissanne Lewis-Thompson, afternoon newscaster and general assignment reporter at St. Louis Public Radio. Then, we travel back in time to share Jonathan’s own words about what the Slavery, History, Memory, and Reconciliation Project meant to him. Finally, historian Dr. Kelly Schmidt will explain how Jonathan’s care for descendant communities shaped the project and his youngest brother, Jacques, will share how Jonathan’s passion for cultural memory, ancestry, and history began.

There are no tags associated with this post.
0
August 24, 2021 Posted by markholguin in News

State Rep. Donna Baringer On How Congressional Redistricting Could Stack Up In Missouri

On the latest episode of Politically Speaking, state Rep. Donna Baringer returns to talk with St. Louis Public Radio’s Jason Rosenbaum about congressional and state legislative redistricting — and some election-related items that could be up for discussion in 2022.

Baringer is a St. Louis Democrat who represents the 82nd District, which takes in a number of southwestern wards of the city.

Here’s what Baringer talked about on the show:

Baringer has a master’s degree in corporate communication from Lindenwood University and a bachelor’s degree in business management from Maryville University. Before being elected to the Statehouse in 2016, she served on the St. Louis Board of Aldermen for 14 years.

There are no tags associated with this post.
0
August 16, 2021 Posted by markholguin in News

On the latest edition of Politically Speaking, Mike Jones talks with St. Louis Public Radio’s Jason Rosenbaum about the state of St. Louis and St. Louis County politics — and how redistricting may play a role in reshaping both environments.

Jones is a man of many titles, but most recently was a member of the state Board of Education. He’s also served as a St. Louis alderman, a corporate executive, the head of the St. Louis housing authority and an adviser to a St. Louis mayor and a St. Louis County executive. He retired from public life recently but is still a sought-after analyst of regional politics.

Here’s what Jones talked about on the show:

Jones began his political career more than three decades ago as a St. Louis alderman in the city’s 21st Ward. Since then, he’s become a go-to adviser for state, city and county officials. Jones is also a columnist for the St. Louis American, writing about regional and national politics.

There are no tags associated with this post.
0
August 9, 2021 Posted by markholguin in News

Missouri Sen. Greg Razer: Vaccination Is The Way Out Of COVID-19 Wilderness

Sen. Greg Razer joined St. Louis Public Radio’s Jason Rosenbaum on the latest episode of Politically Speaking to talk about how state and local governments are reacting to the spread of the delta variant of the coronavirus — and the impending special session on congressional redistricting.

The Democrat represents Missouri’s 7th District, which takes in a portion of Kansas City and several other municipalities in Jackson County. He was elected to his seat in 2020 after serving two terms in the Missouri House.

Here’s what Razer talked about during the program:

A native of Cooter, Missouri, Razer moved to Kansas City after attending the University of Missouri-Columbia. While he was at Mizzou, Razer had the honor of being the school’s mascot, Truman the Tiger, during sporting and student activity events.

Razer spent eight years as a deputy regional director for U.S. Sen. Claire McCaskill. He was responsible for a large part of western Missouri, including rural outposts in the state’s northwest and central counties.

Last year, he easily won a Democratic primary for the 7th Senate District — which was tantamount to a general election win, since that district tilts heavily toward Democrats.